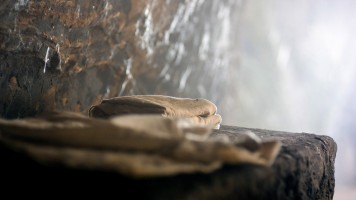 It was a hurried job.
It had to be.
The sun was already low in the sky and soon would set.
And when it did, the Sabbath would begin and all work would cease.
Even the heartbreaking work of burying the Messiah.

They were shocked that Pilate had agreed to give them the body.
After all, people who were crucified were never buried.
Instead, their bodies were thrown onto the garbage dump outside the city, a testament to their place in society as convicted criminals and a warning to all to avoid their fate.

But money talks.
Or perhaps it was the shame Pilate felt for crucifying a man he knew was innocent.
Or even the shock that someone as rich as Joseph and as powerful among the Jews as Nicodemus had asked for the body at all.

For whatever reason, Pilate agreed to hand the body over to these men, just as God planned.
The soldiers reversed the order of what they had previously done, lowering the execution stake to the ground, prying out the three nails and pushing his dead weight off the cross and onto the ground.

Nicodemus and Joseph worked as quickly as they could. They hastily wrapped him in long strips of cloth from the neck down, using a paste of oil and spices to bind the strips together, the cloth sticking to his battered flesh. And then they carried him to Joseph’s own tomb, carved out of the rock of the hillside.

When they got to the tomb, they reverently laid his body on the hard shelf of rock and covered his face with a square of linen. Then someone – or many someones — leveraged the stone into place, finishing before the sun went down.

And it was done.
The work of burying the Son of God.

But then Sunday came.
The woman arrived with more spices to redo the hasty job, wanting to honor their Lord.
And they found their work unnecessary.
Because the greater work had already been done.

They didn’t understand what their eyes were seeing until the angel explained it to them.
“He is not here! He is risen! Go and tell his disciples!”

And they ran with joyful hearts to share the news.
Except the disciples did not believe them.
Peter and John dashed to the tomb to see for themselves.

And there they found the grave clothes piled neatly on the stone slab, with the linen square that had covered his face neatly folded and off to the side.

No strips of cloth could hold the Messiah.
And unlike Lazarus, he had not needed human help to unwrap his body.

No door of stone could hold him in the grave.
And while he did not need it rolled away for his sake – after all, he could walk through walls with his newly resurrected body – it was pushed aside for our sake, for the sake of the world, to show that the tomb was empty.
—-
As I meditated on these facts, the accounts from Scripture about the resurrection, I was reminded of the many verses in the New Testament that say that I, as a Christ-follower, have been crucified with him.

But they also say that I have been raised with him as well.

In his letter to the church at Colossae, Paul puts it this way:
“Therefore if you have been raised with Christ [to a new life, sharing in His resurrection from the dead], keep seeking the things that are above, where Christ is, seated at the right hand of God.” (Colossians 3, AMP)

And it struck me anew.

I have been raised with Christ to a new life.
The old has gone, the new has come. (I Corinthians 5)
The same power that raised Jesus from the dead is at work in me. (Ephesians 1)
I have been given everything I need for life and godliness. (2 Peter 1)
There is no condemnation for me because I am in Christ Jesus. (Romans 8)

These are facts.
Things I know in my head to be Truth.

So why, oh why, do I tend to hang out in the empty tomb?
Why do you?

Instead of going all in with our new lives in Christ, we try to mix in the old life with the new.

We have been clothed with His righteousness.
But we act like we are still bound by strips of cloth.
We excuse our actions with phrases like, “I can’t help it, that’s just who I am” – when who we are is a completely new creation.
And instead of “taking every thought captive to Christ” we bind ourselves with grave clothes to old thought patterns, old lies that the enemy has long whispered in our ears.
Instead of digging into the Bible to find out His thoughts, we fill our heads with meme theology and musical phraseology – things that may or may not match His Word.

We have been made a glorious fragrance in the nostrils of God (2 Corinthians 2).
But we drape ourselves with stained and stinky grave clothes.
We mix what God has said in His Word with what we wish He had said and try to live in that middle ground. And our fragrance becomes muddled, the decay of the old mixed with hints of the new life, a nauseating, hypocritical stench.

We have been offered the adventure of a lifetime, following God into the great unknown, launching out into the deep with Him.
But we prefer to hang out in the empty tomb, afraid of what might happen if we dare to trust Him.
It feels safer there.
The cost might be too great.
He might ask us to take heartbreaking risks.
He might require us to actually live what we say we believe.
To rest on His promises.
To agree with Him that “in this world we will have trouble” but that He has “overcome the world.” (John 16)

The angel asked the women, “Why do you seek the living among the dead?”
And I ask myself, “Kathy, why do you respond like the dead when you are really one of the living?”

Why do you doubt God’s promises?
Why do you fear?
Why do you question His love for you?
Why do you not access the power He has given?
Why do you choose to believe the lie that “He is not good and does not know what He is doing”?
Why do you so often try to take the controls from His hands?

I don’t know about you, but I don’t want to hang out in the tomb.

I want the adventure of following God with my whole heart.
Without fear.
Leaving the old behind.
And constantly living in the new.
I want to walk out – and stay out – of the tomb of the old and into the vibrant life of the new.
Clothed in His righteousness.
Walking in His power.
Smelling of His goodness, grace and glory.

It’s a moment by moment decision, by the way.
A constant surrender.
Empowered by His indwelling Spirit.
A heartbeat to heartbeat choice. And the only way to really live!