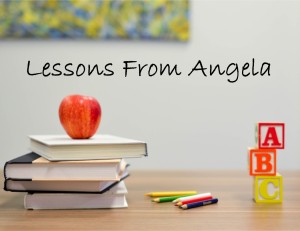 Angela’s body succumbed to cancer a few weeks ago after living for 54 years and battling the disease for the last two. Her fight was valiant, but in the end, the cancer was the vehicle God used to take her home to heaven.

And yes, I know for sure, as much as I can know anyone’s eternal destiny, that Angela is in heaven. I know she confessed with her mouth that she was trusting Christ and Christ alone to save her from her sin.  I saw evidence of God’s work in her life. I watched her live full out for Him and I watched her die so very well because of Him.

You might think that Angela and I were close friends. We were not. But we shared several common loves and common interests.

We are both passionate about God, loving having a relationship with Him. We are both followers of Christ, acknowledging our need for a Savior and believing that Jesus died to take our sin on Himself. (Those commonalities are in the present tense because I know both are still true about each of us today. They are by far the biggest bond we share. Before we are anything else, we are sisters in Christ.)

But we also shared a love for the craft of writing. We were both more on the extroverted and dramatic side of things. We both loved a good laugh and the company of great friends. And we also shared a love for South Potomac Church. Angela and her family found it long before I did, but we worshiped together there for the past 20 years. (Those commonalities are in the past tense because they are no longer a part of her day-to-day existence even though they are a part of our shared history.)

As I have been thinking about Angela and praying for those who are waiting to be reunited with her, I realized that there are several lessons she taught me through the years, even though we were not day-to-day friends. Sisters in Christ who enjoyed an occasional great conversation, yes. Facebook friends, sure. And two people who share a lot of friends in common, yes. But even from a distance, she taught me the following:

Angela was black. Her husband is white. They were married the day I graduated from high school back in 1988. Not an easy time to be a mixed-race couple. Angela could have used the negative experiences that came with being a black woman in our culture, both before and after marriage, to become bitter. She could have shut down or shut up. Or she could have shouted in rage and eviscerated her enemies with her tongue and her pen. But she didn’t. Instead, she used her voice to speak up for change. To promote racial reconciliation. To have the tough conversations with a loving heart. Angela had a voice that could have been ugly or could have been silenced, simply by what she could have allowed to fester in her heart. Instead, she used her voice to echo God’s heart, speaking the Truth in love every chance she got.

Lesson Two:
No matter who you are or where you come from, you have a message. It is your job to share it with the world using the gift set that God has given you.

I know this sounds a lot like lesson one. But with your voice comes a specific talent or gift set. Angela had a way with words and so became a writer. She even wrote the eulogy for her funeral – and it was great. Humorous, touching, truthful, well-written – these were the hallmarks of Angela’s writing. And we are blessed because she chose to nurture the gift God had given her to promote the message He had called her to share.

You have a message as well, if you are a follower of Christ. Your primary message is the story of how He called you out of darkness and into His glorious light. You also have a gift set that He has given you. It may not be writing. It may be cooking. Or organizing. Or building stuff with your hands. But wherever your gift set and your message meet, that is what He is calling you to do. To be. To share. Angela did it faithfully. Will you? Will I?

Lesson Three:
No matter your circumstances, you can make yourself feel better by taking your eyes off of you and focusing on others.

More than once in the 20 years I knew Angela here on earth, she sent me a note of encouragement from out of the blue. Well, actually, they were sent from out of HER blues. When she was down, she would choose to write someone else a note to lift them up. The last one she wrote me is one I will never forget. She hand-delivered it to me at the church office while she was off work because she was recovering from major surgery. She felt awful physically and emotionally that day, so she made a choice to use her limited energy to bless me. Where most of us would have wallowed, she chose to take her eyes off of herself. She wrote a note and hand-delivered it to me, exhorting me to continue in the good work God has called me to do. And in the process of delivering encouragement to me, she encouraged herself. How different our world would be if each of us chose to bless someone every time we felt down! They would be encouraged, we would be blessed, and our world would be changed one small act of kindness at a time.

Lesson Four:
No matter how you are dying, you can choose to live fully and die well.

This is probably the greatest legacy that Angela left for all of us who knew her. From the moment she received her very grim diagnosis she purposed in her heart to live – really live – the rest of her days on earth. She made plans, set goals and partied hard, in the very best sense of the word. She nurtured relationships as well as nurturing her faith. And she lived out her faith until the very last breath that she took, never allowing bitterness and anger to take root. She battled both by her own admission – but she fully trusted God, even to the end. In her eulogy she stated that she was grateful for the gift of cancer that God had given to her. And she lived that gratitude, even as the end of her days were full of suffering. There are so few Christ-followers who end their earthly days well. Far too many are derailed by sin or bitterness or doubt or fear. But not Angela. Was she perfect? No – she would be the first to laugh at that idea. But she faithfully lived out all the things she said she believed, even as her body failed and her prayers for earthly healing were met with a “no” from the God she adores. For this example, this legacy of ending well, I will always be grateful. It is rare – and it is a gift that Angela gave to everyone who loves her.

Angela’s earthly existence was a gift that came with lessons we all need to learn. How she lived and how she died are a legacy of faithfulness, “a long obedience in the same direction” as Eugene Peterson put it. I am sure she heard, “Well done, good and faithful servant” when she saw her Savior face to face. I am looking forward to chatting with her again in the not too distant future. And in the meantime, I hope I will remember to live the legacy of faith that she left behind.

Angela, thank you for all you taught me. Looking forward to seeing you again soon…

3 thoughts on “Lessons From Angela…”