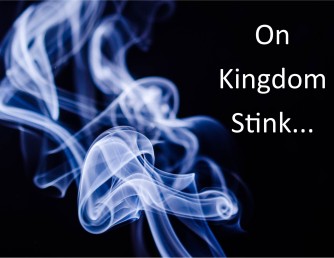 Do you love cilantro?
Or do you hate it?
There is usually no middle ground with that question.
Very few people can “take it or leave it” when it comes to that particular herb.
It’s because of genetics. To some people, cilantro tastes amazing. But to others, it tastes exactly like chewing soap.

I am genetically very similar to my Mom in a lot of ways. Hair color, eye color, skin color, mannerisms – we are very much alike. But, thankfully, I did not get her “cilantro tastes like soap” gene. I think it’s delicious while she finds it repulsive.

But the fact that the exact same thing can be delicious to me and repulsive to her reminds me of something Paul wrote to the church in Corinth.
He said they stunk.
In fact, he said we all stink. Well, all of us who are Christ-followers stink.
He said we are all constantly releasing an aroma.
And depending on who smells you – their genetic code, so to speak – you either smell like something delicious or something repulsive.

Paul puts it this way in his letter:
“But thanks be to God, who always leads us in triumph in Christ, and through us spreads and makes evident everywhere the sweet fragrance of the knowledge of Him. For we are the sweet fragrance of Christ [which ascends] to God, [discernible both] among those who are being saved and among those who are perishing; to the latter one an aroma from death to death [a fatal, offensive odor], but to the other an aroma from life to life [a vital fragrance, living and fresh].” (2 Corinthians 2:14-16a, AMP)

Did you catch that? Paul said that everyone can smell something wafting off of the life of a true Christ-follower. To the person who also knows Jesus as Savior, that aroma is awesome, life-giving, and fresh. But to the person who does not know Him, you stink. Or, rather, He stinks in you.
Same odor. Different reactions.

Why? Because what they are smelling from you is convicting in one way or the other. When a fellow Christ-follower meets you and you begin to interact, you can usually sense the Holy Spirit in each other within a few minutes of conversation. There is a recognition in your spirit that says, “Hey, they are part of the family, too!” And it is encouraging. Affirming. Life-giving. You are (hopefully) on the same page in the major stuff – who God is and how you get to heaven – so it (hopefully) makes everything else easier to deal with, even when it is tough stuff like racial reconciliation or politics. You share a common ground that provides a bridge of communication and mutual affection, even though you hardly know one another. A sweet aroma!

But to the non-believer, your life is a reminder of who they are not and what they do not have. Or, at least, it should be. They listen to your words and look at your actions and think, “Wow – she’s different. Where is that peace coming from?” Or “Why is he so joyful even when his life is falling apart?” Or “How can she be kind to that person who was so rude to her?” And even as they are drawn to the things they see or sense in you, they are also repulsed by it at the same time. They begin to rationalize how they are just as good as you, with or without your “religion”. They look for flaws in you – and of course, they find them because you are still a work in progress. And they fight giving over their will to the One Who created them and is using you to draw them to Himself. It is a life or death fight for their eternal destiny – and until they surrender, you stink. You are a constant reminder of the choice they need to make to surrender to Him, a constant reminder of the dull ache of the emptiness in their soul.

Or, at least, you should be.

Because you have been genetically altered by God. When you accepted the free gift of salvation, you were born a second time into the family of God. And with that birth, the Holy Spirit came to dwell in you. He began to pour His mind into your life and exude it out through your actions, your words, your reactions and your responses. He is the aroma they smell coming from you because you have been changed. The old has gone, the new has come. (2 Corinthians 5:17) The fruit of the Spirit is starting to be evident in the branches of your life. (Galatians 5:22-23) And that person who doesn’t know Him is torn as they watch it happen. They wrestle with “I want that – but I don’t want to surrender.”

But, here’s the thing. As I look around at my church, my friends and even my own life, I often feel like we try to spray on some kind of spiritual deodorant so that we not an offensive odor to the non-Christ-follower. We choose to not say what the Holy Spirit puts on our lips because we “don’t want to offend”. We choose to not voice what the Word of God says on a sin issue because we are afraid of the response we might get. We choose to try to blend in rather than stink out the place with the wonder of grace.

And by the way – there is a HUGE and important caveat here. If you have not been actively loving the nonbelievers in your life, actively and intentionally living love in your interactions, then please, don’t speak up. Don’t share the Truth. Keep your mouth shut and keep spraying that deodorant you have been using. Because the Bible doesn’t say anywhere, “Beat people about the head with the Truth in the name of Jesus.” Instead, it says to “Speak the Truth in love” (Ephesians 4). It says to “Love others as God has loved you” and to “Forgive as you have been forgiven”. It says that when people see your LOVE for them, they will know you are a Christ-follower. So I am not exhorting you to be a stinky Christian in words only. We have far, far too many of them as it is. I am begging you to live the love that you have been given. To get to know the Word of God and then apply to yourself first. And then to let it transform EVERY place your feet take you and EVERY conversation you have. With your boss. And with your spouse. With your kids. And with their teachers. And yes, even with the person on social media who makes your blood boil. We should be stinking up every area of our lives – but with the aroma of Christ and not hypocrisy. With the aroma of His righteousness and not our self-righteousness. With the aroma of His sacrifice, not the stench of our selfishness.

Not sure if you stink in all the right ways? Ask Him to show you. He will not only show you – but He will give you everything you need to stink up your corner of the world with the aroma of amazing grace. Indescribable love. Astonishing forgiveness. Inexpressible power. And when you do that – when WE do that – He will do there what the disciples did in the earliest days of the church – they “turned the world upside down”(Acts 17:6) – one stinky relationship at a time!