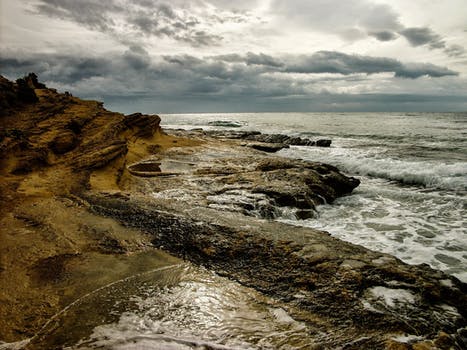 On Alexander the Great, Ancient Tyre and a Victorious Life…

The people thought they were safe in their island fortress.
And for a long, long time they were.

They had built one city in two locations on the sparkling Mediterranean Sea – a section on the mainland and one on an island offshore.

The island was protected by strong winds and waves on one side, making a naval approach nearly impossible. And it had reefs on the other side that served as natural protection.

So, when Nebuchadnezzar of Babylon invaded the mainland city, the people simply moved to the island. It was a walled city surrounded by impassable natural defenses. And, just as Ezekiel prophesied, Nebuchadnezzar conquered the mainland city of Tyre. However, he was thwarted in getting to the island and eventually gave up on that piece of real estate.

After that, the people felt even more secure. And they would have been, except for the fact that they angered Alexander the Great. He asked to come to the island to worship in the temple of their god. They said, “Nope!” and he said, “Are you kidding me?!?”

He already possessed “Old Tyre” – the mainland city – and now his army completely destroyed it, tearing down the walls, razing the buildings, even scraping the dust from the ground. And what did they do with all that debris? They threw it on top of the reefs protecting the island – and they kept doing that until they had built a land bridge all the way across to the “protected”, “impenetrable” island fortress. And Tyre – both “Old” and “New” fell, just as Ezekiel had predicted. That land bridge remains to this day, built up by blowing and drifting sands off the coast of Lebanon.

So, why the history lesson?

Because Tyre’s defeat is replayed in so many lives today.

There you are, bebopping through life, dancing along.
You feel safe, protected, secure in your little island, your heart.
After all, you know Jesus as your Savior.
And, while life isn’t perfect, you rest secure in the knowledge that He has conquered death and the grave. He is at work in your life, the glue that holds you together. You have His Word. You catch glimpses of His hand at work in your life. You are learning. Growing. Changing gradually from the inside-out.

Until suddenly, it isn’t.

Sometimes the storms are overt attacks from the enemy, an obvious play of his hand to get you off track, off balance, and off task.

And sometimes storms are simply the fallout of living in a fallen world. Cancer. Birth defects. Or someone else’s depravity bumping into your peaceful island home.

But frankly, the storms are not the biggest threat you face.
They can be devastating.
But they are unmistakably storms.
So you deal with them.
You shore up your defenses and batten down the hatches.
You cry out for help and cling to the Rock of Ages until the storm passes.

But the more subtle danger comes from the debris that you allow in the water of your life.
Unforgiveness.
Bitterness.
Hidden sin.
Ingratitude.
A bad attitude.
A subtle idolatry that shifts your focus off of God and onto something else.
A watering down of His Word that makes your chosen sin acceptable.
Or simply an ongoing disobedience about something you know He has called you to do.

These things don’t gallop in as storms.
They are more subtle.
But if you allow them to build, you will quickly have a land bridge that opens you up to further attack, stronger assaults, battering rams of temptation.

It’s so easy, too!
That is why the writer of Hebrews says, “Watch out that no poisonous root of bitterness grows up to trouble you, corrupting many”. (Hebrews 12) And Moses warned the Israelites to not allow “a root [of idolatry] bearing poisonous fruit and wormwood (bitterness)”. (Deuteronomy 29)

Poisonous roots.
Stealthily planted.
And needing to be ruthlessly pulled.
Because if you don’t, they tend to grow, strengthening and piling up much like Alexander’s land bridge.

So what is the antidote?
How do you avoid these roots, these land bridges that allow attack?

1. Keep short accounts with God. I don’t always see the subtle bitterness of spirit that has landed in my heart or the idolatry that is creeping in. But He does. Ask Him often to show you where you have not forgiven, where you are allowing an idol to take over, where your attitude stinks. He will. And He is “faithful and just to forgive our sin and cleanse us of all unrighteousness” when we confess these things to Him. (I John 1:9)

2. Keep short accounts with people. Either overlook the offense, truly letting it go. Or, if you cannot do that, sit down and talk with them. Hash it out. Fight for unity. Love as Jesus loved. Difficult, but oh, so worth it. You are not responsible for the land bridges of their hearts – but you are most definitely in charge of seeing that yours is not successfully built!

3. And last, cultivate gratitude. It is very, very difficult for bitterness and gratefulness to dwell in the same place. When you feel your attitude tanking, think of what you can give thanks for in that situation. For that person. For this season of life. Write it down. Text it to a friend. Keep a gratitude journal. Tell God. But choose thankfulness. It is a bridge-busting, root-of-bitterness-yanking, massively powerful weapon in your arsenal. Don’t believe me? Try it – you’ll see.

Please, for your sake, bust up those land bridges, big or small. Yank those roots. Confess your sin. Love others enough to sit down and talk. Obey quickly. And watch God get the glory as you “give thanks in all things”. Thwart the enemy at his game. You’ll see the Kingdom of God thrive in your heart – and spill over to bless many others as well!