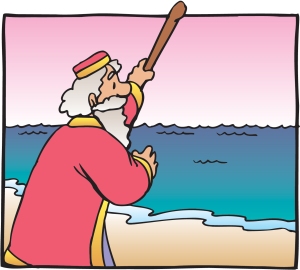 I have had enough. I am generally not a complainer – but this is TOO much. I just have to let you know how unhappy I am!

I am sitting in a tent, in the middle of the desert.
OK – so Yaweh told us to leave Egypt.
Great.
And He told us to leave in a hurry.
Fine.
I prefer bread that has some yeast in it, but I can deal with this unleavened stuff if it means getting away from that awful Pharaoh.
I can even be OK with the whole sacrificed lamb and the blood on the doorpost thing. I can still hear the screams of my neighbor when she discovered her oldest son had died – along with their pet dog and several of their cows. I appreciate that the angel of death passed over our house and spared my Malachi.

You, oh great leader Moses, in all your stuttering wisdom, you take us on this winding path into the desert instead of the short way back to Canaan! And for all your planning, you managed to direct us right to the edge of the Red Sea! I know, I know – you claim it is God leading us and that He is the one who brought us here. But the Egyptian army is right behind us! I swear, I can feel the breath of those soldiers on my neck even as I write this! It is the middle of the night and the only reason they haven’t attacked is that humongous dark cloud that is between us. OK, OK. It has turned fiery, which is pretty wild. And it seems to be keeping those Egyptians back. But really, Moses, how long can a cloud last? Do you really think that is going to keep us from being annihilated as soon as the sun burns it off in the morning? You even said to not be afraid because Yaweh goes before us to fight for us. But, Moses, there is NO “before us”. The only “before us” is the SEA! So my choice is to drown like a rat on a sinking ship or be slaughtered by Pharaoh’s best guys. And your best advice is to “Not be afraid”?!

This is too much!

And all of that is BEFORE this wind kicked up! So here I am, in the middle of the night, in a tent, in the desert, with my tent barely standing before this mighty windstorm! Sand is whipping everywhere. It is in my teeth! It is all over my body! It stings! My children can’t sleep. My wife can’t sleep. I can’t sleep. And my neighbor just said that we are moving out, in the middle of the night! Moving where? Are we going to try to swim for it? What is with this? How dare you bring us here? I thought our lives in Egypt were miserable – but at least there I had decent food, a roof over my head and somewhat cooperative weather! (OK, OK – the last few weeks have been weird with all those plagues – but generally speaking…)

So let this be my formal complaint – and probably my last will and testament. We go to face our two choices – the Red Sea and certain death or the Egyptian army and certain death. Thanks a lot, Moses. And you too, Yaweh. Thanks so much.

A Fed Up Israelite

———-
Exodus 14
“The Egyptians chased after them with all the forces in Pharaoh’s army…
As Pharaoh approached, the people of Israel looked up and panicked when they saw the Egyptians overtaking them. They cried out to the Lord, and they said to Moses, “Why did you bring us out here to die in the wilderness? Weren’t there enough graves for us in Egypt? What have you done to us? Why did you make us leave Egypt? Didn’t we tell you this would happen while we were still in Egypt? We said, ‘Leave us alone! Let us be slaves to the Egyptians. It’s better to be a slave in Egypt than a corpse in the wilderness!’”
But Moses told the people, “Don’t be afraid. Just stand still and watch the Lord rescue you today. The Egyptians you see today will never be seen again. The Lord himself will fight for you. Just stay calm.”
…Then the angel of God, who had been leading the people of Israel, moved to the rear of the camp. The pillar of cloud also moved from the front and stood behind them. The cloud settled between the Egyptian and Israelite camps. As darkness fell, the cloud turned to fire, lighting up the night. But the Egyptians and Israelites did not approach each other all night.
Then Moses raised his hand over the sea, and the Lord opened up a path through the water with a strong east wind. The wind blew all that night, turning the seabed into dry land. So the people of Israel walked through the middle of the sea on dry ground, with walls of water on each side!
Then the Egyptians—all of Pharaoh’s horses, chariots, and charioteers—chased them into the middle of the sea. But just before dawn the Lord looked down on the Egyptian army from the pillar of fire and cloud, and he threw their forces into total confusion. He twisted their chariot wheels, making their chariots difficult to drive. “Let’s get out of here—away from these Israelites!” the Egyptians shouted. “The Lord is fighting for them against Egypt!”
…So as the sun began to rise, Moses raised his hand over the sea, and the water rushed back into its usual place. The Egyptians tried to escape, but the Lord swept them into the sea. Then the waters returned and covered all the chariots and charioteers—the entire army of Pharaoh. Of all the Egyptians who had chased the Israelites into the sea, not a single one survived.
But the people of Israel had walked through the middle of the sea on dry ground, as the water stood up like a wall on both sides. That is how the Lord rescued Israel from the hand of the Egyptians that day.”

I look at the Israelites and shake my head.
They were FULL of complaints!
Every time something went wrong, they turned on Moses and God.
I like to think I would not be like them.
“If I had been there, I would have reacted differently”, I tell myself.

But I do the same thing they did.
Something goes wrong and I panic.
I wonder where God has gone.
What He is up to.
And if I can really trust Him.

Even though I have SO much more than they did.
I have the complete canon of Scripture.
Story after story of the faithfulness of God.
And all of His promises in writing.

Not only that, I have the Holy Spirit of God indwelling me.
Something they did not have and probably never even dreamed of having.
Because I have Him, I also have the same power that raised Jesus from the dead at work in me.

I believe, Lord! Help my unbelief. Keep my eyes on You. My lips from complaining. And my heart from doubting Your goodness. I often do not understand what You are doing. But You are good and everything You do is right. So lead on, Lord. Lead on…